I founded my small publishing company Clicker Spiele in 2000 with the aim to publish my own game ideas and to inspire other players to play logic games.

After producing handmade games in the first four years (in 2002 I won the 2nd place in the game competition Premio Archimede with the game), I dared to start a semi-professional production with “Old Town”.

At the SPIEL ‘2004 in Essen “Old Town” was one of the board games that was enthusiastically received by the audience (“Old Town” was awarded 2nd place most innovative game of Hall9000). After some other game developments like the Ostfriesenlauf and the puzzle fun BLUE I further developed the unique game principle of “Old Town” and realized it in the game Schinderhannes. Schinderhannes was also the starting point for the cooperation with the brilliant graphic artist Christian Opperer. 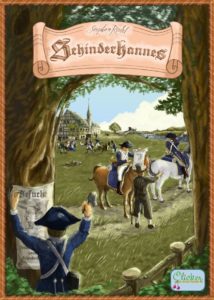 In 2013 the game Cafè Melange with a completely new logic mechanism was released and in 2016 the game Gads Hill 1874 with received excellent reviews was released. Gads Hill 1874 can be seen as a direct reissue of the game Old Town, with many small changes in the game process.

Since I run my small publishing house Clicker Spiele (www.clicker-spiele.de) as a hobby, I am glad that I found a reliable distribution partner and wholesaler for my games in Spiel direkt eG.